From Data Center to End Points

For many years NCS Technologies has been one of the leading sellers of rugged solutions to civilian agencies and the military.

NCS is a notable manufacturer or rugged servers, including its "Bunker Class" NexServ RS110 1U rack mount server, and its NexSer RS210 2U. Both deliver high performance for the broadest range of applications and configurations, and are engineered to fit perfectly in tight spaces and operate in harsh conditions (aboard ships and in tactical situations on land). In the notebook and tablet space, NCS resells a wide range of solutions from Getac. The portfolio includes a fully rugged convertible, rugged notebooks, a fully rugged server, fully rugged tablets, a wearable tablet and a healthcare tablet. 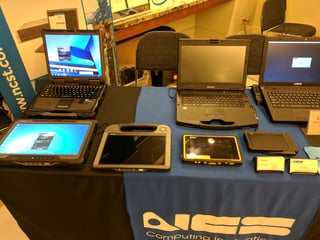 The Getac B300 rugged laptop is now on its sixth generation, with strong battery life, 4G LTE and a bright display.

Also available from NCS is the Getac X500 ultra rugged mobile server. It delivers high performance in commercial off-the-shelf form factor, and can be easily deployed to emergencies, disasters and temporary set-up environments.

Learn more about these products, as well as the Getac line of fully rugged tablets, from your NCS sales representative.To learn more Getac solutions right now, just download this brochure.